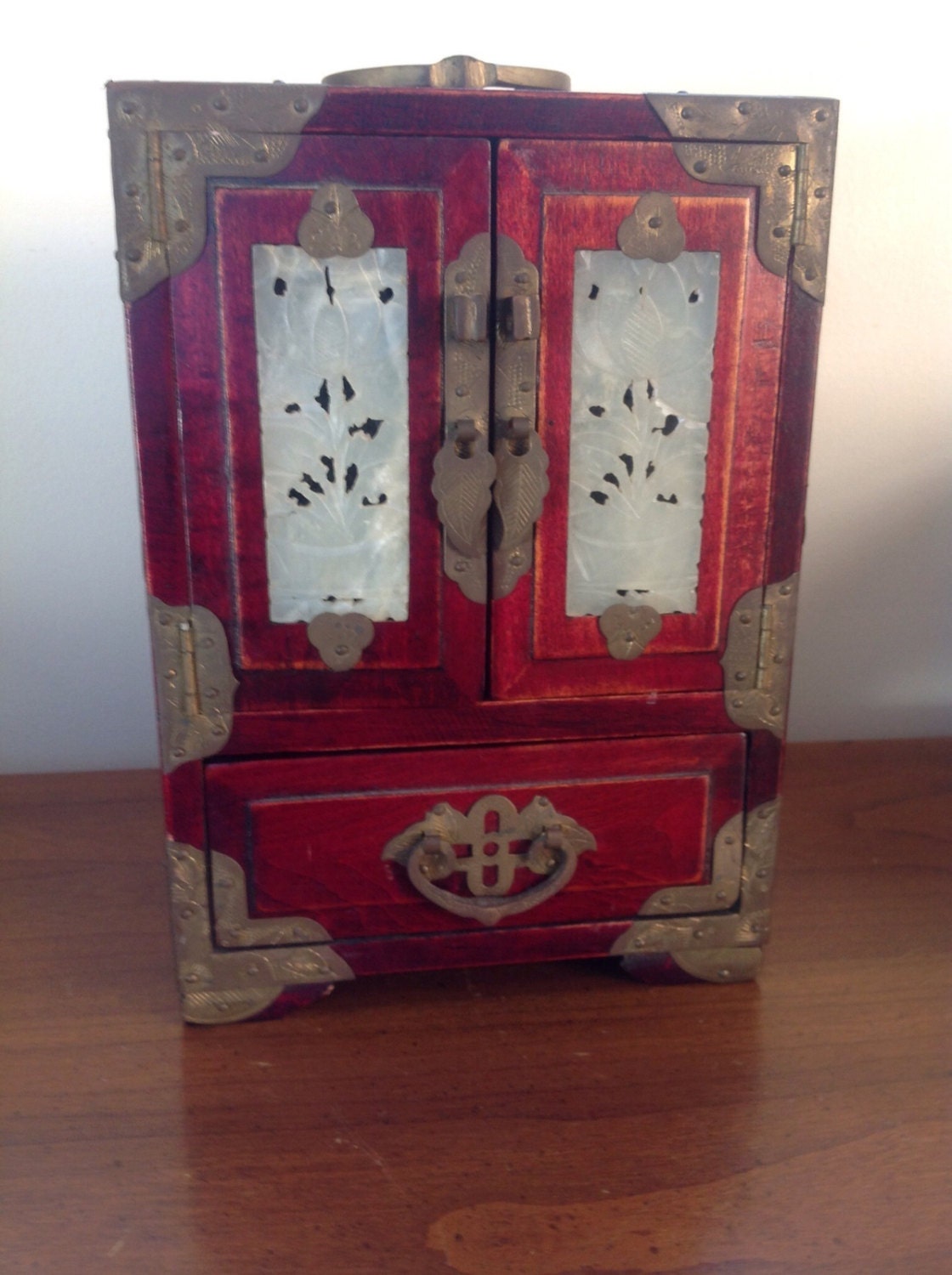 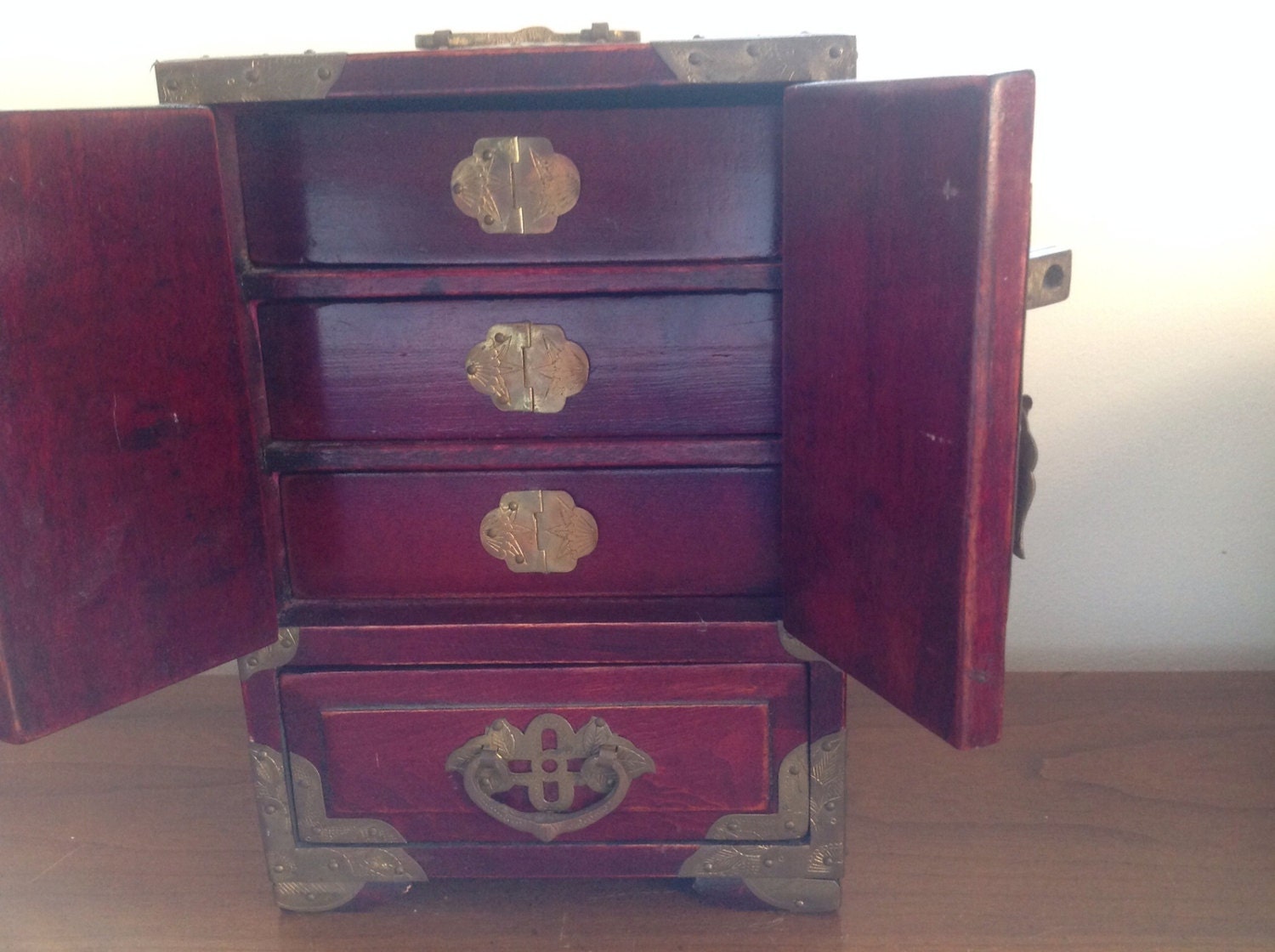 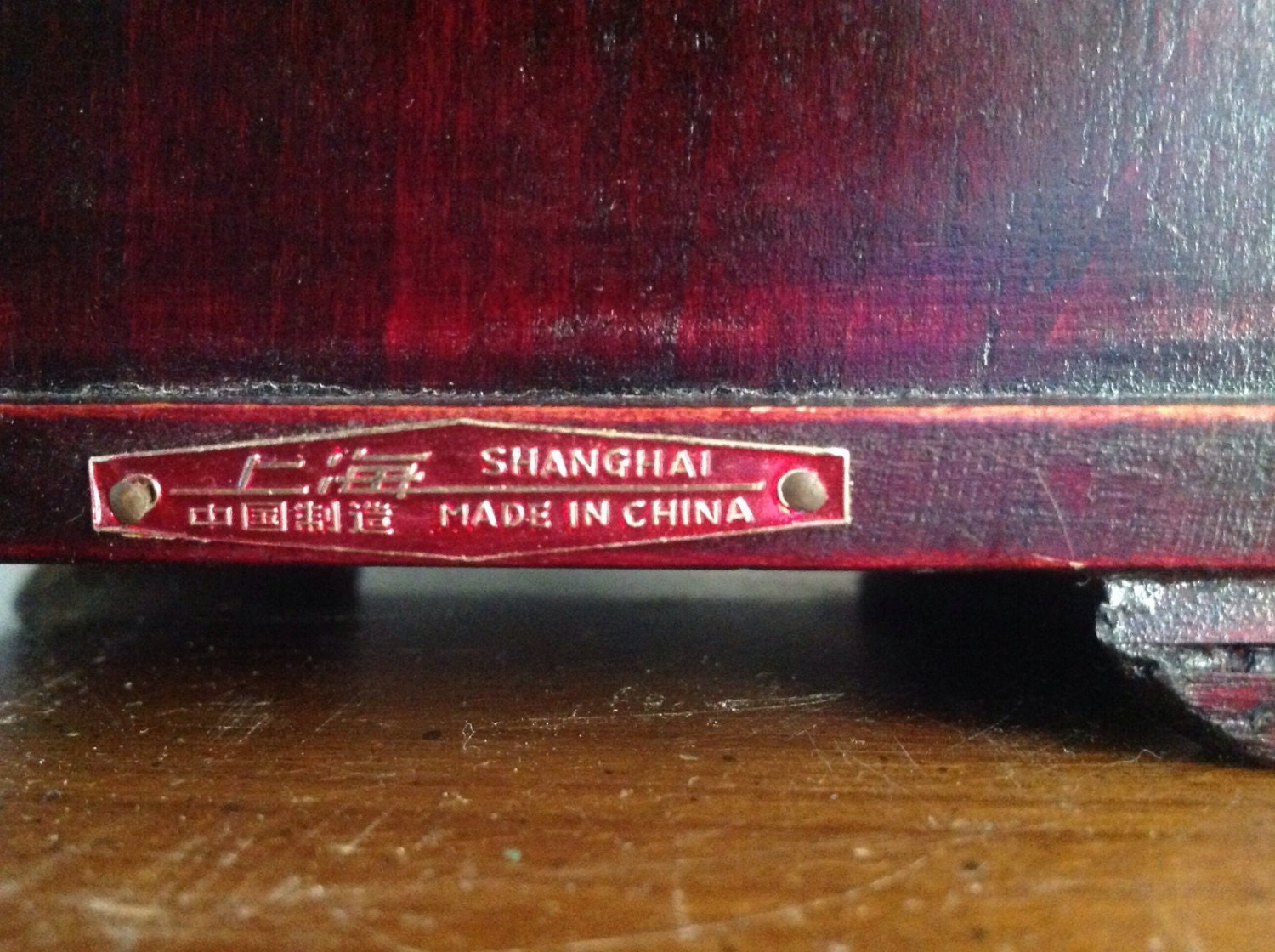 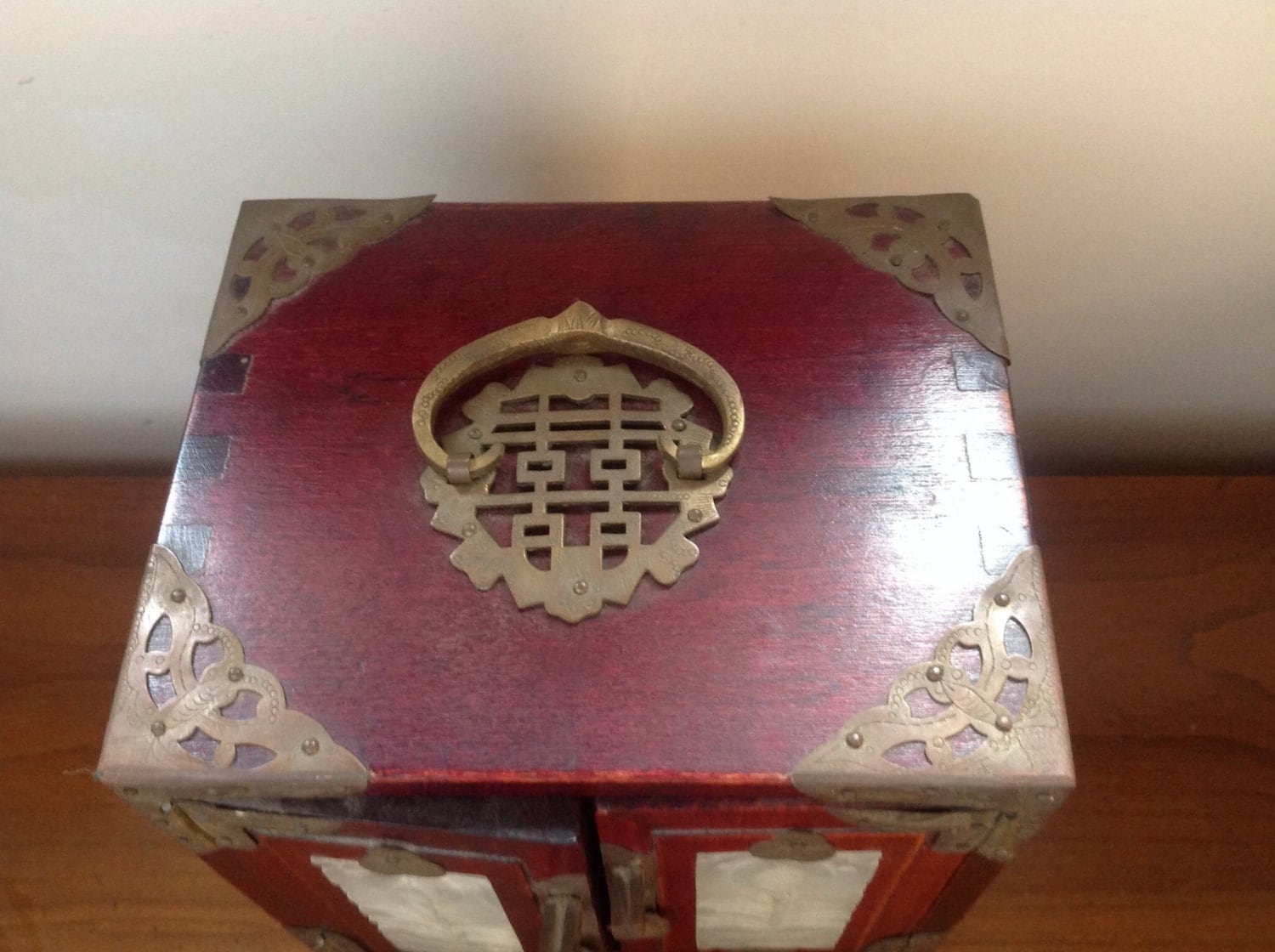 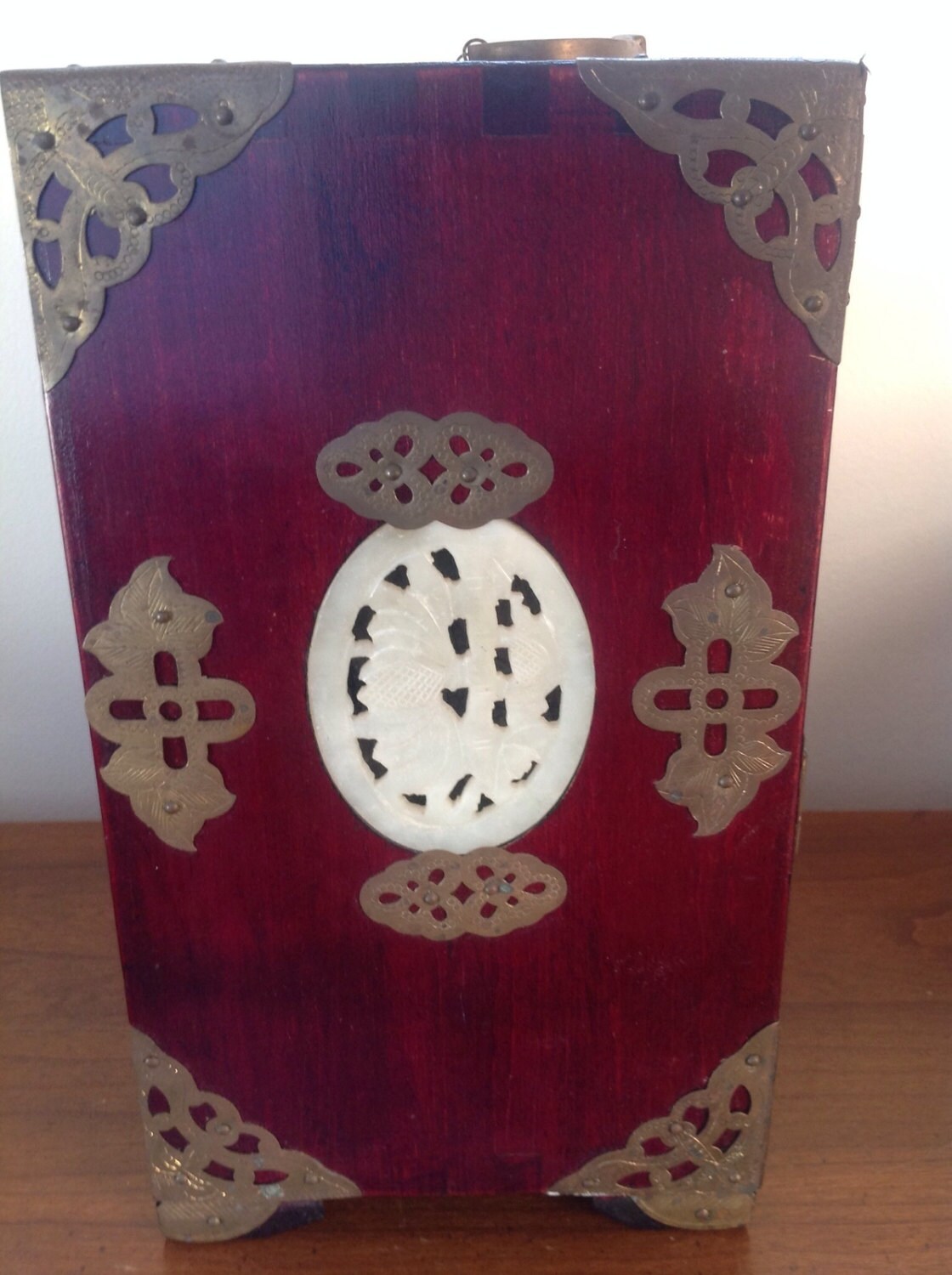 This Auction is for an antique Asian/Chinese wood jewelry box with 4 floral White Jade panels of gem quality, two on the front & one on each side. There are four drawers each lined with green silk floral, each drawer has a brass hinged handle. The bottom drawer has a secret compartment that is exposed when lifting out top tray of the drawer. Artemisia leaves make for the brass handles on the front. Brass accents on all four corners top and bottom engraved with butterfly designs. The handle on top is that of a fruit bat, which sits on top of a brass mounting of four fruit bats. This is a well made Rosewood Jewelry Box. Dovetail construction. This is a very nice Jewelry box!! It is solid Rosewood, not veneer and will be double boxed for shipment due to the weight to prevent damage in shipment. This is not a music box.


Shanghai Jade Carving Factory is the most brilliant pearl in the treasure of the Chinese national and traditional culture and art. Its skills, which have under gone a continuous development in its age-old history, have left for the later generations, a lot of carvings of exquisite workmanship and have brought up highly skilled master craftsmen through ages. As one of the traditional Chinese handicrafts, Jade carving has a history of almost 5000 years. Some of the raw materials used are found in China, such as white jade in Xinjiang, agate in Heilongjiang, Xiuyan jade in Liaoning, Dushan jade in Henan, and some of them are imported from abroad, such as rose quartz from Brazil, coral from Japan, jasper from Canada and lapis lazuli from Afghanistan. These materials are made into exquisite art pieces, including legendary figures, vases and incense burners, flowers, birds, animals and various kinds of jewelry and ornaments.

Situated in the southwest of Shanghai, Shanghai Jade Carving Factory, with a history of about 60 years, specializes in jade carving and jewelry
Before the founding of New China, jade carving was done on an individual family basis with small workshops and few varieties.

Driven from pillar to post, many veteran artisans had to change their trade, which was on the verge of extinction.

After liberation, the People's Government attached great importance to the revival and development of the traditional handicraft industry. As a result, artisans came back to their former jobs. In 1955, 17 handicraftsmen were organized into a jade carving cooperative, which expanded and turned into a state-owned factory with more than 400 workers in 1958. As production went up, the number of handicraftsmen increased year by year. Today, the factory is the largest producer of jade carving in China, and the best-known factory in the Orient.

Payment is due at time of purchase. If you are custom requesting an item, please be courteous to follow through on your order.

Item tracking is included for domestic packages. If you require faster than the already fast shipping that I provide, please send a message and we can come up with a solution to fit your needs. Regarding international shipping: duties and tariffs are not included in price of item or shipping cost. Buyer assumes all responsibility for this including incorrectly charged duties or tariffs by their home country. Any item returned as undelivered due to incorrect address or unpaid duties or tariffs will be returned to general stock with no refund including shipping. Please be sure that your profile shipping address is correct. Purchased item will only be shipped to address on file. Buyer assumes all responsibility for lost or misdirected packages. Items will not be gifted or undervalued to avoid duties or tariffs. Please do not leave negative or low ratings for shipping issues or duty or tariff fee issues. Those are beyond the scope of my responsibility.

But please contact me if you have any problems with your order.

If the wrong item has been sent to you, I will be sure to remedy your purchase if you notify me within 24 hours of receiving package. You must immediately notify me via etsy messaging.
Please no returns on beard items due to sanitary reasons.
All sales are final.

0 items in your cart